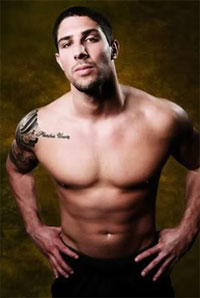 Brendan Schaub is signed to MC Hammer’s MMA agency, Alchemist Management, alongside Nate Marquardt, Tim Kennedy, Jorge Riveria, Antoni Hardonk and Stefan Struve just to name a few. Subsequently, this makes them all ‘Too Legit Too Quit‘. Don’t expect any tapping out from these guys (On a side-note, apparently I’m the only person that doesn’t remember how truly epic that MC Hammer video was).

In an interview with MMA Nation on 106.7 The Fan this week, Brendan Schaub virtually flings his booger at Brock Lesnar’s camp by calling them ‘meatheads’ and a potpourri of other entertaining terms.

“You know, what do they do, right? It’s all meatheads. So, you got all these stud wrestlers. You know what they are, they are a modern-day Hammer House. You know what I’m saying? Like, they get together, it’s all these big dinosaurs pushing and wrestling each other around, and heaven forbid they should bring in a striker or bring in a guy to teach them to evolve their game. You know, they’re really not evolving. You can say Brock’s evolved with his jiu-jitsu because he submitted Carwin with a head-and-arm choke. It’s not like he armbarred the guy or did an ankle lock or something. They’re just not evolving, man, and I think the sport of mixed martial arts is more like guys like Georges St-Pierre, guys like Nate Marquardt or myself, who are well-rounded, they can do everything. When I’m in camp, I’m constantly training, trying to improve my game and get better at all aspects. Can’t say the same for those guys. You know, they go in there and they wrestle. And, you know, he’s doing well with it, but I think the sport needs to continue to grow, and I don’t think they help the sport grow.”

In an unrelated note, a recent study showed that most Americans have eaten or tasted their boogers at some point in their lifetime. I just want to go on record saying that I’ve never done this. Thank you. Have a great day guys — you nasty, booger eating people. [Source]