Breaking: Rory MacDonald has suffered a cut and is out of the Penn fight! There’s no pic of the cut, so this .gif from UFC on FOX 4 should be a fine placeholder

Yet another reason to want the singularity to just happen already. In the future, 38 stitch-requiring wounds like the one Rory MacDonald suffered tonight will be no problem. Rub some medi-gel on there real nice and you’re fine. Ready to head back out to train within minutes. I know this future will be true because Mass Effect tells me so.

Now BJ Penn is out of a fight at UFC 152 and we have a potential article in queue for whenever the eye gash picture of Rory’s drops. What will happen? We will be grossed out, yet satisfied because the MiddleEasy has desensitized us to levels our mothers are ashamed of, and BJ may or not get a fight. That’s what will happen.

MMA Junkie revealed the news of Rory’s gash after the UFC on FOX 4 post fight conference. Here’s what Dana said to those handsome gentlemen:

“Rory’s out. He got cut open today. Wide open – 38, 48 stitches, something like that,” White said. “No contact for a month. (The fight is) off. I found out tonight, halfway through the show.”

EDIT: here’s one angle of Rory’s cut. Check the comments for the other. Thanks to MiddleEasy reader Sacramento Top Team for the pic! 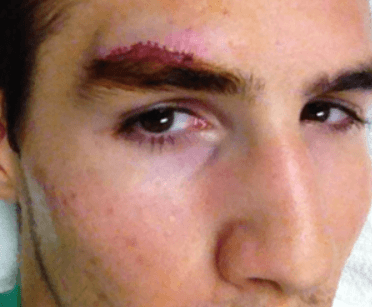 In place of Rory MacDonald’s eye gash, we present to you this fascinating .gif from UFC on FOX  to tide everyone over.

Look at this portrait of Nick Diaz made entirely out of a performance enhancing drug
Read Next Post →
Click here to cancel reply.