Hey guys, welcome back to the one and only MMA relationship column, #AskMEasy.  We get it. It’s hard to balance your love of MMA with a thriving personal life. So we’re here to help. Your boys at Middle Easy got this MMA obsession/social skills balance down to a T. Every week we’ll take your questions from Twitter and Facebook about all the problems you can encounter in the real life of an MMA fan. Solve the world’s issues one week at a time.

How do I wipe all MMA thoughts from my brain leaving only the fights? No knowledge of rumors, injuries, cancelled fights, BS, etc #AskMEasy

While no way currently exists to delete memories, I can only imagine this type of “Eternal Sunshine” service is bound to be realized in the near future. I imagine after a while, once the initial taboo of deleting memories wears off, people will get memories cleared up as a matter of personal hygiene. Sure, some people will hoard memories, enduring social stigma to remember every detail they can, closing themselves off from the world to bathe in memories. We will put those people on reality television shows, publicly mocking their inability to part with the past. Doctors will recommend parents get memories of stressful labors deleted from infants. Getting your first three days alive wiped away will be the new circumcision.

So naturally, this will trickle down to MMA. What fight fan wouldn’t be tempted? Who doesn’t want to erase the nasty stain of Frankie Edgar/BJ Penn III from their mind? Imagine never knowing the disappointment of when you heard Jon Jones failed his drug test before UFC 200. Even less drastic, why not clear out all those lingering recollections from boring prelims? You don’t even remember the whole fight, just maybe an awkward scramble or funky eye poke. Why not free up some space on that hard drive? Make room for the more important memories to shine. I get the appeal.

Of course, an MMA fandom devoid of all the distractions Stevening describes already exists, without he aid of futuristic technology. An elite group of MMA fans have achieved the perfect Buddha MMA consciousness. Those who understand the zen of MMA have attained the state of MMA mindfulness, and they don’t rely on deleting memories. Their secret? They constantly experience MMA in the present. In their worldview, a fight cannot be cancelled because no fight was ever booked. A a list of fights on a future card reads to them more like a tarot card future. Fights never exist until they are happening. Once fights end, they cease existing. There is no scoring; there are no rounds. Fighters do not have records, and thus aren’t ranked. The illusion of championship titles is shattered. Unfortunately, we all cannot attain this state of MMA Buddha mind, as it requires 30 years of instruction with the master Tank Abbott, and he’s pretty fucking busy.

I contend that even you we could do what you suggest, Reverend, you would not benefit from it. The fights in and of themselves, while thrilling and occasionally even awe-inspiring, would quickly become devoid of the meaning. The key context that we need as fan are the people involved in the fight. To know something of who these people are, to any degree, even if we learn it through the fight, that breathes the life into fighting. It makes the chaos reverberate with emotion. And all the human element is going to breed a bunch of dumb bullshit. The circus atmosphere that surrounds this sports in just a symptom of its humanity. All the seedy bullshit from promoters, the fight politics, small time scam-artists selling magnetic wristbands, and straight up liars are the necessary birthing fluids of this beautiful sport. So let’s savor them.

Well, it seems we have just enough space for another quick question. This one is from American Kickboxing Academy’s own Eric Luna.

My wife and I will have been together for 9yrs on 6/21 and I am taking her to her first Tool concert that night. How cool is that? #AskMEasy

Well, that just dope. Damn it, Eric. You just gonna come on here, and lay down the god damn blueprint for everyone? Taking your wife to a Tool concert is just perfect, because the music is going to be awesome, but also the crowd is definitely going to frighten the uninitiated. Always a good idea to throw your significant other in the proverbial social fire and see how she copes. Plus, you knocked out a date night by seeing Tool live. Just A+ work all around, Eric.

Got questions that only Middle Easy can answer? Just want to brag about having a cool wife like Eric? Throw us your questions about life, love, and MMA to #AskMEasy on Twitter or Facebook. 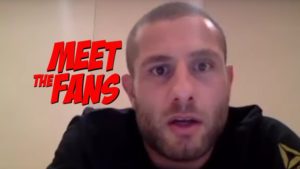 Gokhan Saki Is Bored As Fuck By Your Questions 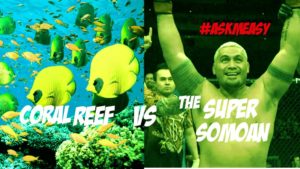