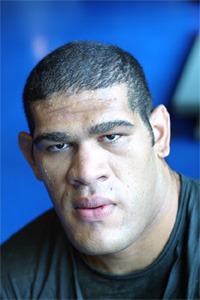 You know all that blurry footage of Bigfoot walking in the forest? You can combine all those tapes and then compare it to a picture of Antonio Silva and every bigfoot expert out there would be out of work. Antonio Silva is bigfoot, the mystery is over. Everyone can stop spending their weekend searching for some mythological creature in the woods. Dude’s right here and he’s fighting in Sengoku 10. Bigfoot went from shakey camera footage to a 12-1 MMA record and a fresh Sengoku contract. Give the dude props, Harry and the Henderson’s couldnt do what Antonio Silva did in the course of only 4 years. Just when you thought it was erased from your childhood, now you’re going to have that TV show stuck in your head the rest of the day. Give it up for late 80s television, that stuff would never fly today. 1986 was the only time in which a hairy alien that ate cats was socially acceptable.

Fedor/Brock has been the dream match-up everyone has been throwing around but looking at Bigfoot’s wins coupled with the dude’s impressive 12-1 record, you have to consider Antonio Silva as one of the top heavyweights out there.Technically, Silva is still the EliteXC heavyweight champion of the world (RIP). 9 of the guys wins have come via KO so the question of whether this guy has dynamite implanted in his knuckles is without question. After Overeem and Werdum happens this August, and Brett Rogers gets a shot at the belt…Strikeforce needs to sign this guy up. Hell, if Fedor goes through all the heavyweight contenders in Affliction the Atencio needs to turn to Silva, learn some portuguese, and ask Bigfoot to take on The Last Emperor. Or…there’s always Brock Lesnar vs. Antonio Silva. Solid. [Source]