Anderson Silva is a fighter who exists on his own plane of reality. In many ways, you could see him as the absolute master of the world of MMA. Many still debate if Chael Sonnen was really taking him down and controlling him in the first fight, or if Anderson was just trolling Chael before he could submit him. While to many that would sound absolutely insane, the reality is that this is a guy who regularly drops his hands and dances around strikes much like Neo dodged bullets in The Matrix.

As much as we all respect Chris Weidman for his efforts and for becoming the UFC Middleweight Champion, his win feels hollow and like it was part of a greater lesson for us all in morality, humility and what it truly means to be the best at something. The past few moments I’ve been trying to collect my thoughts on what Anderson Silva’s loss really means in the UFC, where fighters rarely can go on winning streaks and where Championships are treated like a hot potato due to how evenly matched they are. Anderson Silva was the ultimate anomaly.

Anderson Silva could have finished Chris Weidman at just about any point during that second round. That statement, as much as it feels like hyperbole to some, feels like an absolute fact for me. He was never in danger and was simply toying around with Weidman, frustrating him, getting inside of his head. It could have been an early, highlight finish for Silva, who let Weidman do his thing in the first round and showed him that it was not going to work. In the end, Anderson Silva sacrificed himself during a battle that he could have won, and instead of being upset with himself or demanding a rematch, he tipped his hat and said that he wanted nothing more to do with the UFC Middleweight Championship, which has defined his career.

The same reason that Obi-Wan Kenobi closed his eyes, bowed his head and raised his lightsaber while squaring off against Darth Vader in Star Wars Episode IV: A New Hope; he had accomplished everything that he possibly could and now it was time to move on and let someone else take over the battle. Even if you hated the prequel trilogy of Star Wars, you’ll probably at least know that Obi-Wan Kenobi and Anakin Skywalker had met once before that fateful day on the Deathstar, where Obi-Wan overcame Anakin, leaving him crippled, angry and burnt to a crisp. He chose not to finish him on that day, so when they met again, he had one final lesson to teach to Luke to help to lead him away from the path of darkness that consumed his father, which was to allow Vader to win as opposed to strike him down in front of his son.

It was a touching moment which has been up for debate from fans since it first came out; did Obi-Wan just give up? Was he not strong enough to defeat Vader? Was he just trying to restore order and teach a lesson which would help to shape the future? I like to believe that it was the latter, and hopefully with the Star Wars films out of George Lucas’s hands it could mean that there is hope for the Star Wars realm and that Obi-Wan’s sacrifice won’t be in vain.

Anderson Silva accomplished everything that he needed to accomplish in the UFC and MMA. He is seen as one of the best fighters, if not one of the best martial artists ever involved with the sport. It is an important distinction to make that Anderson Silva is a martial artist, not just a fighter, as I feel that the UFC has truly strayed from the “martial way” towards simply being a marketable sport (which it isn’t as marketable as all of us hardcores really think). Some might get upset by Anderson Silva’s theatrics in the ring, but those same people probably walk around wearing Bruce Lee t-shirts and have Bruce Lee quotes on their Facebook profile. The truth is, if you are as good as Anderson Silva is, you can do whatever you feel comfortable doing, which is exactly what he did. This time it cost him, but he is comfortable with that, he was ready for it. 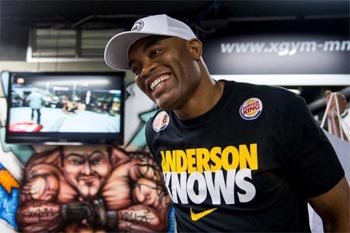 The final lesson that Anderson Silva taught the UFC and the MMA community as a whole was how a champion should be graceful in defeat, as well as to show the ultimate humility towards your opponent. You might think that Anderson Silva was disrespecting Chris Weidman, but he was just fighting him in the way that he knows how, which ended up costing him the fight and the title, both of which were easily within his grasp.

In the Star Wars saga Luke Skywalker learned the lesson that Obi-Wan was trying to teach him, albeit not easily. When that fateful moment came for Luke to choose between letting his hatred take over and destroying his father, he instead chose the path of forgiveness and understanding. It is unclear what Anderson Silva’s sacrifice will mean for MMA as a whole, if he will just be forgotten and a footnote in the history books like many of the past UFC Champions, seen now as fallible and flawed, or if he’ll be remembered for all that he did and all that he meant for the sport. That is up to the next generation of fighters, fans and media now.

Woah, why does UFC.com have Chris Weidman listed as the interim champion?
Read Next Post →
Click here to cancel reply.