Alright, so the official poster for DREAM’s NYE event doesn’t have Fedor, but we still like it anyway

Look, we know it’s called ‘Fight For Japan: Genki Desu Ka Omisoka 2011’ but ‘DREAM NYE Event’ is title friendly. Besides, a ‘New Year’s Eve event’ is what it’s been called since Inoki Bom-Ba-Ye went down in 2003. Back then, Fedor Emelianenko fought the relatively famous professional wrestler, Yuji Nagata, in an MMA match. In reality, it wasn’t really a ‘match.’ More like a dominant and one-sided beatdown that ended in about a minute. That was Fedor’s first New Year’s Eve bout, and now exactly eight years later, we get to see The Last Emperor take on Olympic judoka, Satoshi Ishii.

After snatching the gold at the 2008 Beijing Olympics, Ishii announced that he wanted to try his ‘head-first slamming abilities’ in mixed martial arts and started by challenging Fedor to an MMA bout. That was somewhat of a step-up in competition, so FEG approached him to sign on a Dream card early in 2009. Satoshi Ishii essentially said, ‘screw it’, rejected their offer and moved out to the US to train with American Top Team. When that was over, he moved to Brazil to train with Lyoto Machida. After spending a few months rolling around at Xtreme Couture in Las Vegas, Dana White personally invited him to Vegas to try to nail out a UFC contract. The two met, probably shot guns together in the Nevada desert, and they simply could not agree on a contract. The rumor was that Satoshi Ishii wanted an immediate title shot, Dana White negotiated that he would take on a top five opponent and it just wasn’t enough for Ishii.

Ishii made his MMA debut at Dynamite!! 2009 against Hidehiko Yoshida, the proverbial match between ‘new hotness’ and ‘old and busted’. Everyone remembers how Satoshi Ishii was a lock to beat Yoshida. That notion came to an abrupt halt when the entire MMA world realized that the bout wasn’t just 1992 vs. 2008 Olympic Judo gold medalist, but a dude that had an MMA record of 9-7-1 (with wins over Mark Hunt, Royce Gracie and Don Frye) versus a guy who was 0-0. Despite being the ‘underdog’, Yoshida grabbed the unanimous decision over Satoshi Ishii.

Satoshi didn’t get the win in his first MMA bout, but he did win his second fight…sort of. Back in March, Satoshii Ishii grabbed his first win over Sasae Paogofie at X-1 in Hawaii. Unfortunately, for reasons that are entirely too complicated for any of us to discern, the bout was changed from ‘professional’ to ‘exhibition’ at the last minute. That meant even though Ishii grabbed his first win in MMA, dude was still 0-1. What an absolute statistical letdown.

On May 15th 2010, Ishii finally grabbed his first professional win when he armbared Tafa Misipati at 2:42 into the first round in Auckland, New Zealand (a country I nearly became a citizen of if it weren’t for my blatant lack of respect for the New Zealand immigration department). On June 10th 10`0, Satoshi Ishii fought Myles Tynanes at X-1 and refused to stop punching his opponent despite the referee jumping in the middle of the beating. This earned him his first official disqualification (which was later overturned) and subsequently the status of ‘that guy who punches after the bell’ in Hawaii.

Since his first professional MMA win, Satoshi Ishii temporarily moved to Los Angeles to train with the magicians at Blackhouse and to no one’s surprise, he’s been undefeated since then. Many people are writing off Ishii in this bout due to his relative inexperience in MMA as compared to Fedor. However as we’ve seen in 2010 and well into 2011, Fedor can be TKOd, submitted and knocked out — a statement that was incomprehensible before June 26, 2010.

Check out the official poster for Fight For Japan: Genki Desu Ka Omisoka 2011, minus Fedor, Sakuraba, Barnett and Sylvia. 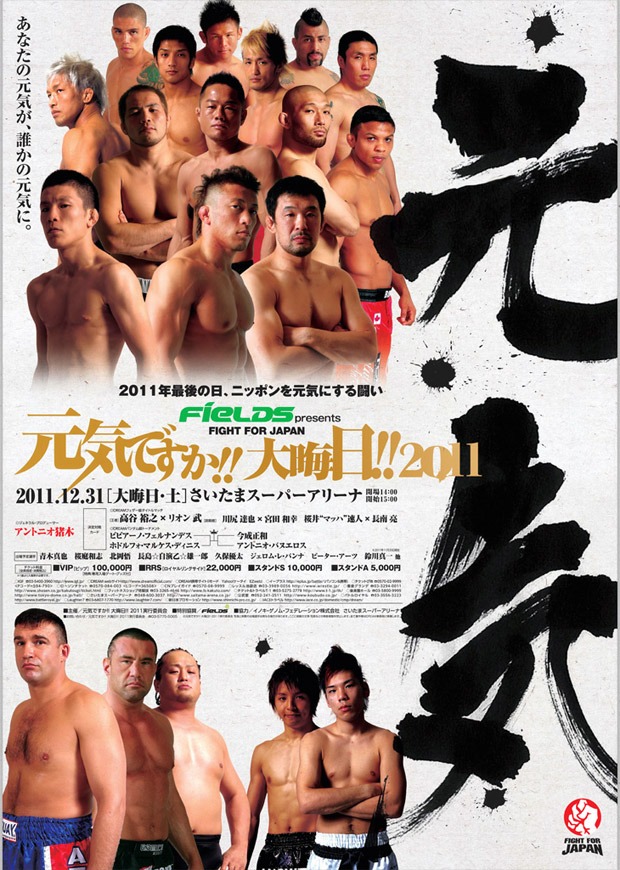