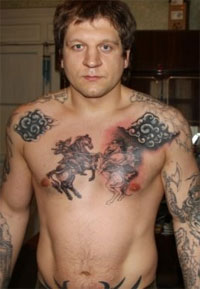 Until technology gets to the point where I can hear every language in the world translated through my iPhone while I ride shotgun on my friend’s Mattel Hoverboard, I’m going to settle for Google Translator while I travel from one corner of the room to the other in this Wal-Mart rollie chair.

It looks like during a Russian game-show called ‘Big Races’ (which is shot in France), Aleksander Emelianenko participated in a competition with a bull to see if he was more of a ‘beast’ than an actual beast. Not sure on the exact details of the contest, but from what I understand, it involved a no-rules match that somehow included urine.

In the end of the competition, the bull stepped on Aleksander’s face and knocked out two of his teeth. From the reports, the studio was literally filled with blood and Alek was rushed to a local French hospital to insert his two teeth which he apparently picked up after the incident. Keep in mind, this is the same guy who hunts bears with knives.

It looks like the studio covered all insurance cost after the incident which would make complete sense if they actually though pitting a human versus a bull in a competition was a good idea. [Source]