After four years in the UFC, Yushin Okami finally gets his title shot 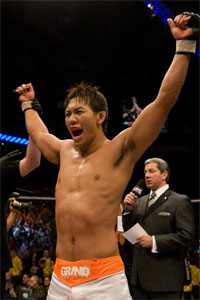 My backyard is infested with four leaf clovers. I still haven’t won the lottery yet. Up until tonight, my backyard was synonymous to Yushin Okami’s UFC career. In his four years in the organization, he’s racked up a record of 10-2, never been finished and has essentially been the sole representation of Japanese MMA in the USA. Okami has absolute no tattoos because he believes tattoos are ‘evil’. However, if someone were to get a tattoo of Jesus Christ or Mother Teresa, that may create some paradox in Okami’s belief of aesthetic epidermal abrasions.

Tonight at UFC 122, Yushin Okami managed to roughneck his way to a unanimous decision win over Nate Marquardt in three rounds of rigorous ground work. The type of ground work that makes you want to curl up on your sofa and realize how great it is not to be punched in the face whenever you go to work.

Yushin Okami finally gets the title shot he should have received at UFC 90 nearly two years ago and hopefully there will be absolutely no injuries preventing Anderson Silva from taking on Yushin Okami in 2011. Well, that’s if he can get past Vitor Belfort.