Not only do we have Carano trying to save the earth from Skynet on August 15th, but she gets more time to do it! Finally, the world’s first female MMA five-minute round fight, brought to you by my imagination (and Scott Coker). First we wielded into existence a fight between The Last Dragon vs. Sho’Nuff (Shogun of Harlem) and now we’ve manifested five rounds of female MMA into existence. Just call me Zeusadamus. If someone called me Zeusadamus, I would throw something at them (something of low value like an extra toothbrush). Really, all that’s left is to give these chicks five-minute rounds, making it a total of 25 minutes of Gina Carano on my TV August 15th. Besides, if a chick named Cyborg wants you to go 5 rounds you really are just forced into it. When’s the last time you’ve ever argued with a chick named ‘Cyborg’ and won? When’s the last time you’ve met a chick named Cyborg? Exactly.

We should all make a sacrifice to the MMA gods today of Funyuns and Sour Patch Kids on your altar (your disgusting computer desk) in hopes of willing five-minute rounds into existence. Because we all know, the MMA gods only respond to 1992 era junkfood (just like every person reading this). [Source]

The Most Rawesomeness Fight in the Universe...Ever - Sponsored by Cageside MMA
← Read Last Post 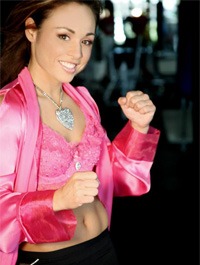