It looks like we’re on the verge of Hector Lombard vs. Babalu Sobral at light heavyweight

Let’s not forget the time when Paulo Flho ‘unexpectedly’ dropped out of his Bellator 18 fight against Hector Lombard because Filho felt that he was ‘too strong’ for Lombard. We don’t really know what the outcome would have been if Filho’s level of strength was reduced by some covert, genetic process to compete with Hector Lombard. Jay Silva stepped in for Filho and in just six seconds, Hector placed Jay Silva on his ever-expanding highlight reel with an inhuman one-punch knockout. There’s no need to search YouTube, I’ve found the fight for you.

Now in an interview with MMAJunkie, Hector Lombard claims there may be a 205 lb match-up with Babalu Sobral in his immediate future.

“I got a call from Bjorn…and he talked to me about the situation that ‘Babalu’ wanted to fight me. He wanted the fight at 205 pounds.”

Here’s what Bjorn Rebney said regarding the potential fight.

“I’ve been a big ‘Babalu’ fan for a lot of years. They weren’t really on our radar, but then they reached out to us and opened the door and asked for a few things. We agreed to all of them…But now we’re siting back and waiting.”

“We haven’t heard anything back from them…in three or four days.”

I don’t believe any of this, Bjorn. We’re going to need to see published photos of your text message conversations with Babalu. [Source] 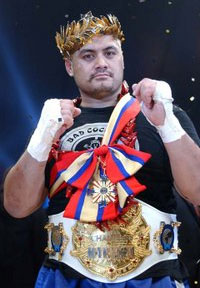 Mark Hunt feels that he's the best on the planet, but couldn't beat a wooden chair in a fight
← Read Last Post

Lil Nog has a plan for Tito Ortiz at UFC 140, and it involves knocking him out
Read Next Post →
Click here to cancel reply.