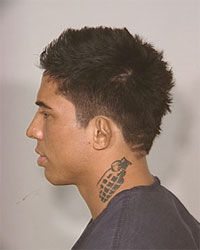 If a dude is named ‘War Machine’, cops can’t really call that a ‘manhunt’. They can call it ‘what’s the probability of me being knocked out by an MMA fighter turned porn-star’ hunt but who the hell wants to say that out loud. It’s official, Las Vegas Police are hunting War Machine and if you manage to come in contact with him, he should be considered armed and dangerous. Here’s the official story from NBC 3 News in Las Vegas.

A man who trained to use choke-holds in the fighting ring is accused of beating and choking his girlfriend.

According to Metro, 28-year-old Jonathan Koppenhaver got into a violent fight with his girlfriend and attempted to strangle her.

He also has a record that includes obstructing a police officer and possession of a stolen firearm.

His last known address was in the 5000 block of West Hacienda in Las Vegas.

Koppenhaver goes by the names “War Machine” and “War Hammer,” and also has a very distinctive hand grenade tattoo on the left side of the neck

Metro says Koppenhaver should be considered armed and dangerous. Anyone with information is asked to call CrimeStoppers at 385-5555.

War Hammer? Dude is an MMA fighter/porn star, not some character out of Mortal Kombat. War Machine we understand, but War Hammer? Come on. [Source]