Tom is 42…but the dude can still brawl 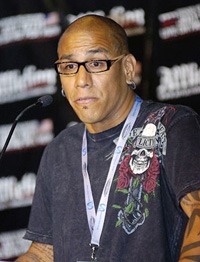 MiddleEasy is back. It was fun doing the whole travel thing, but it prevented the site from being updated as often as it should. So it’s good to be back and I promise this is the last time you will hear me talk about it.

Normally when I’m on a plane the first thing I do is identify the hottest chick on the aircraft so if the plane goes down, I’ll know who to run to and propose one last fling. When I was on the plane yesterday, something happened. All I really could think about were two things (trust me, two things are enough for me). First, Karo Paryisian singing his ‘All the other judos are thrown by little girls‘ song that replays non-stop on UFC Undisuputed. And second, Tom Atencio can actually fight. The dude can really fight. The only conclusion that anyone can draw from why the VP of a multi-million dollar company like Affliction (or any company) would fight is…he’s just keeping it real. The dude is 42 years old and fought a guy at The Ultimate Chaos that was young enough to be his kid. After getting rocked a couple of times, Atencio harnessed the energy of all the T-shirt money he’s got and jumped back up to his feet to break the guy’s nose, forcing him to call it quits after round 2. You don’t see many vice presidents that can rumble in the cage (Joe Biden possibly. Dude has that ‘old guy strength’) and you don’t see many vice presidents that look like they should have a starring role in Apocalypto; but Tom Atencio pulls both off effortlessly.

So what does all of this mean for your boy Dana White? He was slinging the verbal daggers before Atencio’s fight saying his usual ‘no one cares/t-shirt guy/no one cares…etc’ but look at Atencio’s record, dude is undefeated. Dana White will still be Dana White (that’s why everyone loves him) and Tom Atencio will…well, continue to break dude’s noses. 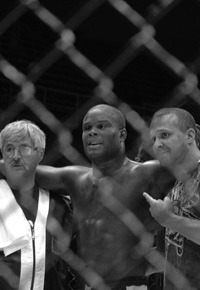 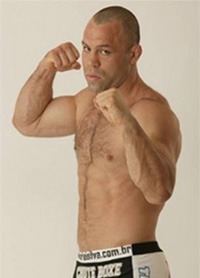