Ricardo Mayorga is moving to MMA 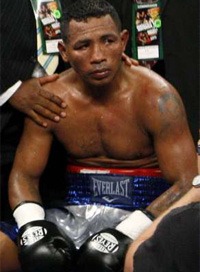 Ricardo Mayorga looks like a guy that knows a guy that can sell you an AK-47 from the trunk of his Cadillac El Dorado. If you’re not familiar with Ricardo Mayorga, dude was the former WBC and WBA welterweight champion among a list of other titles that we’re not going to list because it’s Labor day…and I’m trying to take it easy. Before MMA invaded my attention span like some…illegal ground-and-pound alien, I was an avid fan of boxing. I still am, but I was too. I was both a fan of boxing and a current fan of boxing at the same time. They should give out awards for that. If someone ever gave me an award for that, I would break it in half and tell them they need to get a new job.

Ricardo Mayorga has decided to hold his breath and jump into the ocean of MMA (while we all just kick it on the beach). He’s scheduled to debut later this year on one of Shine’s PPV cards. Dude has banged with the best including Sugar Shane Mosley, Fernado Vargas, Oscar De La Hoya, Felix Trinidad, Vernon Forrest (RIP) and Cory Spinks. Mayorga also has a string of one-liners that could even make Mayhem Miller take note. Here are a couple of he spewed after one of his fights:

You remind me of an old lady that’s past her prime that should be sitting home in a rocking chair doing nothing.”

“I’m the champion. You’ve got to recognize that. My strongest hand is my right hand. You see his eye? I’m going to detach his retina.”

Dude’s going to fit right in. Whenever the date is set for his debut, we’ll let you guys know. In the meantime, take a shower. [Source]

Gina Carano is about to be a really BIG Hollywood star
Read Next Post →
Click here to cancel reply.