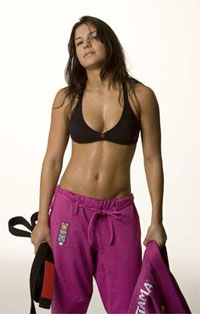 I could stop right now and I would have already made your day. If you didnt know Kyra Gracie existed, now you do. Besides being the hottest thing you will see this year (unless Gina Carano and Michelle Waterson gets in the cage), she’s a dominate Brazilian Ju-Jitsu fighter. With a last name like Gracie, you’re pretty expected to be. The fact that this is the second article written about Kyra Gracie doesnt bother you, I know it doesnt (hands above the desk people). Raise your hand if you would like a Kyra Gracie article written every day for the rest eternity. Both hands people…

She’s only 23 and she’s yet to start her MMA career but its safe to say this chick could fill Madison Square Garden the first time she steps in the cage. Rumor is she’s looking to get signed with Strikeforce for her first MMA after the Cyborg/Carano fight in August. The rumor, in this case, is my testerone filled imagination. After the first article, I sent an email letting her know that we did a piece on her and to my surprise she swiftly responded back with an email that ended with ‘essa e uma responsta automatica’. I thought it was portugese for ‘Marry me because you’re everything I wanted in life‘ but apparently it means ‘this is an automatic answer’. Here’s another automatic answer, lets have babies.