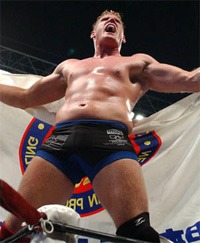 So now that everyone is over the whole ‘Josh Barnett got caught with steroids so he ripped down an entire organization in his downfall including my three non-refundable plane tickets to Anaheim’ thing, can we just see this guy fight? Dude is still the #5 ranked heavyweight in the world just after your boy Brock Lesnar and of course Fedor ‘I punch harder than gravity’ Emelianenko. Fedor can arm bar a black hole out of existence, dude is that powerful.

Josh Barnett’s first steroid test can back with a giant ‘positive’ written over the urine/blood container and Barnett immediately filed an appeal and was instructed to take an additional drug test. The trail with be held in LA this upcoming Monday and if Barnett is cleared of the charges, dude’s license would immediately get reinstated and we just might be able to see that mythical fight between Fedor vs. Barnett.

The guy made an entire organization collapse in the course of 48 hours so you can’t blame the MMA world for feeling a little resentment towards the guy. He essentially gave the pink slip to around twenty of some of the best MMA fighters out there including Jay Hieron who said “I have a lot of bills and no paycheck”. [Source]