Modern combat sports fans might be one of the funniest groups of humans ever assembled. Armed with Photoshop skills, loads of cynicism, and a ruthless sense of humor, fight fans continue to show themselves capable of making comedic gold out of nearly any situation.

So, naturally the internet had something up its sleeve for Floyd Mayweather. With the recent announcement that Floyd owes the IRS $22 million, some enterprising fan decided to come to Mayweather’s aid. Below is a screenshot of the fan made GoFundMe page to help “Money” Mayweather pay off the taxman. 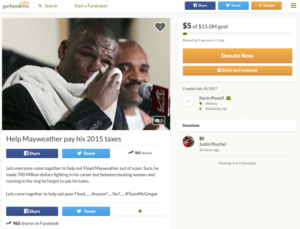 Unfortunately, GoFundMe has no appreciation for high comedy, and has taken down the campaign. But the screenshot and sweet burn will live in our hearts forever.