Floyd Mayweather, tell us how you REALLY feel about UFC… 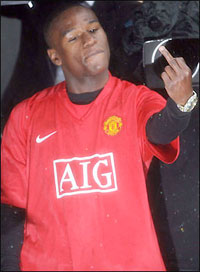 Raise your hand if you’re 39-0. If you’ve lifted your arm and your name is not Floyd Mayweather then you need to pack your belongings and get the F out of asgard. Dude has mowed through the absolute best talent in boxing and this weekend, fight fans are going to have their arms bent behind their back and forced to make the decision on just exactly how they would like their KOs served. Floyd Mayweather vs. Juan Manuel Márquez will be going down at the same time as UFC 103…and Dana White believes they drop a nuke on the ‘ratings war’ and come out the victor. In the meantime, Floyd Mayweather doesn’t even know who Rich Franklin is. Check out what he told Cagereport.net regarding the upcoming fight and UFC in general.

Rich Franklin
“Who’s Rich Franklin? There’s 8 year old kids just starting out in my gym who punch better than that guy. I’ve seen that guy try to punch and felt sorry for him, embarrassed for him – I think Roger [Mayweather] still has some spaces left in the beginners class, might want to get the basics down before he goes head to head with me. I mean come on, until he generates a revenue of 2.5 million he don’t even deserve to be mentioned in the same sentence as Floyd Mayweather let alone be trying to compete with me.”

Brock Lesnar
“The main difference between Boxing and MMA is the fact that boxing is a real sport and requires skill to reach the top. When you watch boxing you know you ain’t [going to] see some WWE clown walk in and take the belt after a couple fights. It ain’t happening. That’s because it takes years to perfect and master the sweet science, MMA is nothing more than a sideshow act that probably won’t even be around in 10 years time. Boxing ain’t going anywhere, write that down.”

Mayweather vs. Marquez
“What you’re getting here is two of the best pound for pound fighters in the world going at it to determine who is number one, what they got there is two journeymen, bar room fighters who can’t tell a fish hook from a check hook…I’m gonna give the people at home something to talk about the next day; everyone is going to be talking about the Floyd Mayweather fight that was on last night. Ain’t gonna be no one talking about those two guys who rolled around on the floor for 3 rounds. That’s why I was and still am the PPV king.”

Cro Cop
“I think he forgot he has a right hand, give him a pair of 12 ounce gloves and Vlad Klitchko would tear up that ass in seconds.”

Tim Sylvia
“Look, I just watched an ex-UFC heavyweight champ, some overweight unathletic chump get one-punched by an over the hill broken boxer, Mercer. Don’t get me wrong, I love Big Ray but his best days are behind him and he one punched an ex-champ, what more do I need to say? Just imagine what happens if a heavyweight contender lays hands on a MMA fighter. We both know what the aftermath will look like.”

MMA fighter’s getting paid
“If so many people want to watch those guys fight then why isn’t Dana White paying them like it?”

There’s a lot of witty stuff I would like to say to follow up all this stuff (Floyd knows Cro Cop?) but CagePotato already beat me to it. [Source]