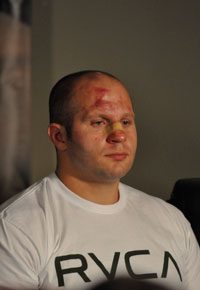 Scientists have studied the tape from last weekend’s Strikeforce: Fedor vs. Rogers and have come to the conclusion that the ‘blood’ that dripped from Fedor’s nose was actually coolant fluid that leaked out from a ruptured tube in his central processing unit. This coolant fluid is the same liquid that appears in Terminator 2: Judgment day which consequently enables Jonathan Mostow to make a sub-par third film of an otherwise rawesome franchise (thankfully Christian Bale flipped out enough to make Terminator Salvation a redeemable flick). Comparing Fedor Emelianenko to a human is like comparing my 2001 Daewoo Lanos to the friggin Death Star. One could take you to 0-60 in a mere 13 seconds, the other can erase entire planets from the galaxy. So when Fedor tried to tell Sherdog that he’s ‘still human’, you have no other choice but to shoot milk from your nose in laughter.

“I still have some gaps in my techniques, in my skills, and that’s why my trainers press me hard to work hard and improve. In spite of the fact that they try to work me hard and make my game perfect, I still, in some places, I look a little bit clumsy.”

“I am the way that I am, but I always remember that the harder a person gets, the more it hurts to fall down. That’s why I think about all the results (that come from) what I do in a calm way. Also, I try to treat all people the same way. We’re all human beings, with two arms, two legs and all of us are equal in front of God.”

I remember in Blade Runner, robots didn’t know whether they were human or not so some of them became prostitutes in clear rain coats and others became Rutger Hauer. I’m not sure exactly what happened in Blade Runner, my uncle forced me to watch it because it would ‘blow my mind’. Maybe if I wasn’t born in the 80’s and haven’t heard of something called ‘The Matrix’ then yeah, I can understand how it can be a little bit ‘overwhelming’ to people who based their speci…alright, going into geekdom. Moral of the story: Fedor isn’t human and whenever you give a stripper money to buy alcohol, she will never come back. [Source]

The Mask theatre is way better than your living room
Read Next Post →
Click here to cancel reply.