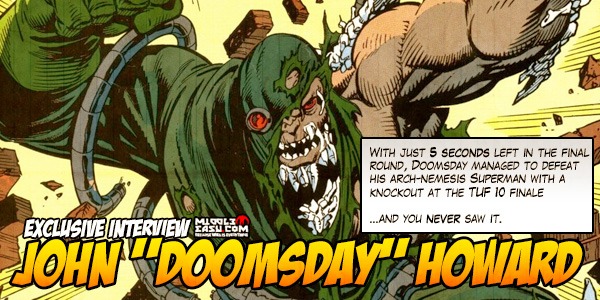 If you’re not familiar with Doomsday, here is a brief synopsis that can only be told from a guy that has absolutely no social life. In 1992 Doomsday killed Superman. To be fair, both combatants died. Out of nowhere, four Supermans appeared and one of them was Shaquille O’neil. The other was a Superman/Cyborg hybrid which strapped Doomsday to an asteroid and shot him into space at a trajectory that would never intersect any other planet. Some mercenaries found him and tried to make a quick buck off Doomsday. Instead, Doomsday killed everyone on the ship and kept flying to Apokolips, home of Superman’s other arch-nemesis, ‘Darkseid’. Normally, you would think an entire planet could stop one dude. Doomsday not only defeated Darkseid, but just started causing ruckus on Apokolips. After Superman was somehow magically resurrected, he tried to bang against Doomsday again. He knew that he couldn’t defeat him so he used a time-warping device to send Doomsday to the end of time. Yeah, the only thing that could stop Doomsday was entropy. That’s deep.

On December 5th 2009, Joe Silva constructed the perfect fight for DC comic geeks. John ‘Doomsday’ Howard was scheduled to go to war with Dennis ‘Superman’ Hallman at The Ultimate Fighter 10 Finale. Everything played out like the comic. Cars were flipped over, buildings smashed and Doomsday seemed to be on his last life until he pulled off the stunning knockout with only five-seconds left in the final round. Some people call it the greatest comeback in MMA history and you will never be able to see it. Actually, if you search on the internet long enough, you will eventually be able to find a video of the fight. We just like to make everything dramatic and use and make things bold just to freak you out. Check out our exclusive interview with Doomsday Howard done by D**k Grayson, only at MiddleEasy.com – Because MMA is Everything.