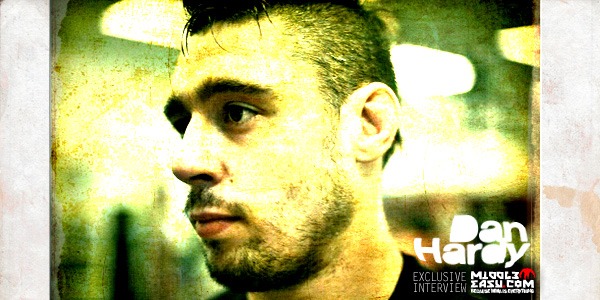 The last time we ran into Dan Hardy, we had no clue what we were doing with this site. We still don’t, but back then we really didn’t know. Somehow we managed to get a press pass to the International Mixed Martial Arts Expo in Southern California and our reporter, Elena Lopez, located Dan Hardy posted up next to some undisclosed booth. She reached in her bag, shoved a microphone in his face and luckily he didn’t walk away from us. In the brief interview, Dan Hardy said that he felt like he was just outside the top ten in his weight division and with a couple more wins under his belt he would reassess his position. After Hardy’s massive win over Swick and Paul Daley’s upset of Kampmann, Dan Hardy is now the #1 contender for the welterweight belt and will face GSP in some New Jersey hellhole March 27th 2010 at UFC 111 (or as the Canadians call it ‘Another UFC event we got screwed out of’).

Somehow, in some long string of chance victories, we managed to interview Dan Hardy again. This time, D**k Grayson conducted a thirty-five minute long interview complete with F/Marry/Kill questions. Our transcriber, Rachel, fell in love with him. She wanted me to put that in there. She also needs a boyfriend, feel free to email her. Check out our exclusive interview with Dan Hardy only on MiddleEasy.com – Because MMA is everything.

Dan Hardy says the pressure is all on GSP, not him