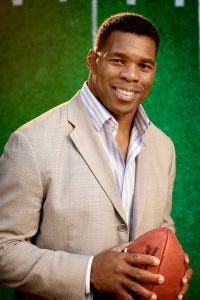 Dana White had a little verbal kung-fu exhibition today with the dude on the left of this article holding a football. When I met Herschel Walker at UFC 103, I really didn’t know what to say so the ‘You’re an idiot’ part of my brain activated and I managed to utter ‘Dude, I really liked you in The Apprentice’. Herschel gave me the ‘I won a Heisman Trophy and played for the Dallas Cowboys and that’s what you remember me from?’ look and I knew it was best to just go back to my seat and drink my $12 cup of Bud Light. In an interview with MMA Fanhouse, Dana White goes off on Herschel Walker and nearly everything associated with him:

“I think it’s ridiculous…People think we’re anti-competition? We’re anti-dumb competition. Doing stupid things like this, putting a 50-year-old guy in the Octagon for the first time, and then going out there putting out press releases like it’s a big deal because you signed a 50-year-old Herschel Walker? Are you serious?”

“Which athletic commission is going to let this guy fight…Who the f**k are they going to find to fight Herschel Walker? A guy in a wheelchair?” “It’s completely disrespectful to the sport.”

Keep in mind that Herschel Walker has stated that all of the money earned in Strikeforce will go towards charity. Friggin charity! I wish that charity was for my ‘Fix my Samsung TV, Samsung’ fund. Note to all, only buy a Samsung TV if you want something to hang your socks off of one month after the warranty has expired. [Source]