Dan Hardy says the pressure is all on GSP, not him 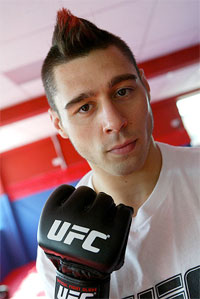 Dan Hardy told us he has an Xbox problem. So do we. That’s probably the only thing we have in common with the guy. He has a hot girlfriend, we don’t. He’s the number one welterweight contender in UFC…I got a buy one get one free coupon at Arby’s which makes me the number one contender for two Beef n’ Cheddars at lunch today. Yesterday, we interviewed Dan Hardy and we had to bring up GSP. Here’s what he said in regards to the pressure being completely off of him.

I just have a mindset and a confidence that are really going to cause him some problems. I think that a lot of time when people step into the octagon against him, they are so concerned with his wrestling and his clench work that they kind of hold back a little bit. I’m just not the kind of guy that is going to do that, so there is going to be pressure on him from the start. And the other thing as well is that everyone is going to expect him to win and no one thinks that I am going to cause him any kind of problems so there is a lot of pressure on him in that respect because he’s got to come in a perform and he’s got to be very, very impressive. All I’ve got to do is go in there and just enjoy myself and you know do the best I can—obviously I’m thinking I’m going to win, but no one else does so that takes all the pressure off me and that’s what’s gonna you know put the pressure on him.

We also brought up the fact that Josh Koscheck is still pretty pissed that he got a title shot before him. Here’s what he had to say.

I think he is just bitter to be honest. You know…I’m in a position that he’d like to be in. At the end of the day, like I said, he’s just not consistent. He wins fights; he loses fights. You know in order to get a title shot you need to kind of rise above the rest. You know a couple of fights ago when I knocked out Rory Markham, he got knocked out by Paulo Thiago and now Thiago has not been impressive since that fight either so it doesn’t really prove a lot. I think he needs to maybe slow his pace a little bit and not take fights so regularly and concentrate on getting some decent wins under his belt. His win against Anthony Johnson was a good one tied to his record but I think he needs a couple more. I think he’s just bitter and I think he’s just shit-talking. At the end of the day, the guy is an asshole and that’s the character that he plays and I think everybody realizes that so he’s expected to say those kinds of things so whatever. He’ll get what’s coming to him at some point.

You should really read the rest of our exclusive interview with Dan Hardy here. It’s good stuff.

Shinya Aoki and Yoshida will be in EA Sports MMA
Read Next Post →
Click here to cancel reply.