And so it begins! Brett Rogers spoke with MMAFanhouse today about his upcoming Fedor fight and The Grim said he not only wants to knock out Fedor, but he wants to be God of MMA:

I’m going to knock him out. He’s going to give me his chin, somehow, someway. He’s going to get sloppy with that overhand right that he loves to do or he’ll try to shoot in for a takedown, and I’ll catch him with either a knee or an uppercut … something. I’m going to drop him. I want the crowd to go (gasp). I want to get that reaction out of people. So I can’t wait…I definitely feel that it’s destiny, man…I’m God then. I’m the God of MMA. I’ll become the God of MMA, right? Isn’t that how it goes? I’m the soul snatcher; I’m the grim. I’ll take all his wins and put them under my belt, and then everybody can just hush up.

God of MMA? That sounds like something Kenny Rice would say about Bas Rutten before Inside MMA (TGI…almost…F). Brett Roger’s first three MMA fights have not gone past a minute, he also KOd a guy in nine seconds and we all remember that Arlovski KO that occurred in twenty-two seconds (nearly three minutes faster than Fedo Emelianenko). The date that’s been floating around in the rumor mill for this fight is sometime in November, be sure to watch the UFC counter-program this event with Brock Lesnar juggling bowling pins on a unicycle. [Source] 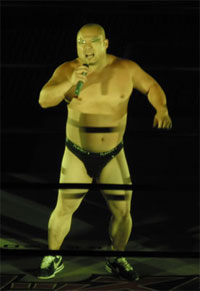