Become a citizen of Big Country 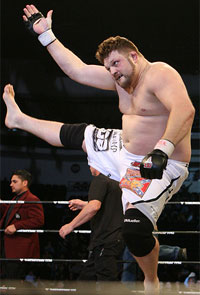 For someone with a 12-4 record heading into The Ultimate Fighter 10 finale this Saturday, Roy “Big Country” Nelson seems to be getting the impression that he is the Rodney Dangerfield of MMA. I almost made a joke about him ‘rolling his way into the finals’ but…I didn’t. The former IFL champ didn’t get much love this season in the TUF house, his work ethic and coachability as a student seemed questionable at best and we all know Dana White rarely has anything positive to say about him. Why? Nelson was smart, not only was he smart but he laid out his plan for all the world to see:

“I was thinking it was a good business opportunity. Going The Ultimate Fighter route is equivalent to fighting about five times on pay-per-view on a regular UFC, so it’s just like advertising and marketing. People see your face three times then they actually know it. It’s one of those things where I just wanted to make sure millions of people would know exactly who I am.

My third fight with (James) McSweeney, it’s the same crucifix position that I got on Kimbo and Dana actually gives me my props afterwards. It’s just the fact, this time I did the same thing I wanted, and this time McSweeney’s face is covered in blood. My goals, hopefully I achieve them, and while I was in the house I did exactly what I wanted, hurry up and get three wins and then hopefully this Saturday I’ll let my fourth and will become The Ultimate Fighter.

Most people would call that domination by frate trane. You have to make it to the big dance and surprisingly, Big Country can fit on that dance floor. Unfortunately, Roy Nelson seems to be another casualty of that unstoppable beast known as reality show editing.

Now Nelson paints a different picture. He’s held modest interviews and earned his BJJ black belt from Renzo Gracie after the show wrapped up. Roy Nelson is more than a southern guy with a big gut, dude has outrolled Frank Mir.

Big Country has his hands full against Schaub on Saturday but if he wins, we may look at Roy Nelson’s gut with the same reverence as Fedor’s overhand right. Coin it here and now, Roy Nelson: the master of the fat crucifix. The ‘fatfix’. [Source]