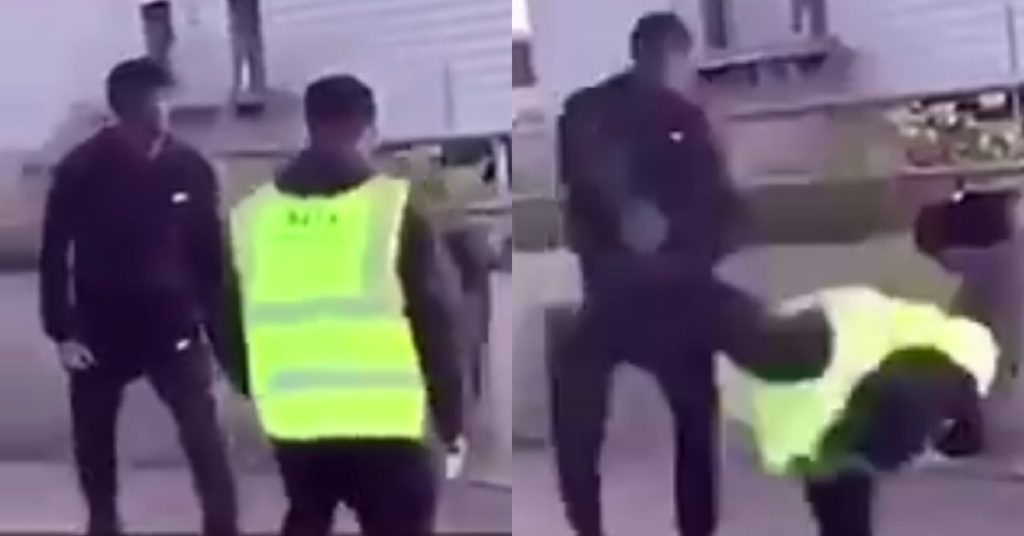 Nick Diaz once asked Carlos Condit “So we throwing spinning s–t now?” After checking out this most recent example of Street MMA, you may find yourself asking the same question.

Oh glorious Street MMA, how you never seem to fail us. When you are stuck inside right now, is there really anything better than watching people lose their souls in the streets? Personally, I think not.

Today’s video session of sidewalk justice comes to us from an undisclosed location in the UK. There is very little context as to what these lovely gentlemen are having a disagreement about. However the man with the stylish gray jacket and sweatpants combo can be heard threatening the man wearing a safety vest.

This is where things begin to get interesting as Safety Sam tries to shove Durag Dave. Dave doesn’t like that very much, so he begins to scream at Sam, before slapping him in the face. The two then get their dukes up, with Dave chanting “What? What? What?” as he feints and drops his hands. That was when Sam decided to answer his questions, with a spinning back kick, directly to the kisser.

Now I just have to be honest here, and say that the single best part of this video is right at the end. To hear Ol’ Davey go from taunting, to letting out that “Huungh” grunt as Sam’s shoe connects to his jaw. The only disappointing part about this video, is not being able to see what happens next.

Not everybody who tries to throw spinning s–t in the streets is successful. However when a Street MMA altercation ends like this, it is nothing but sweet satisfaction.