A Lesson in Street MMA: All the 2016 Black Friday shopper vs. shopper Street MMA fights in one post 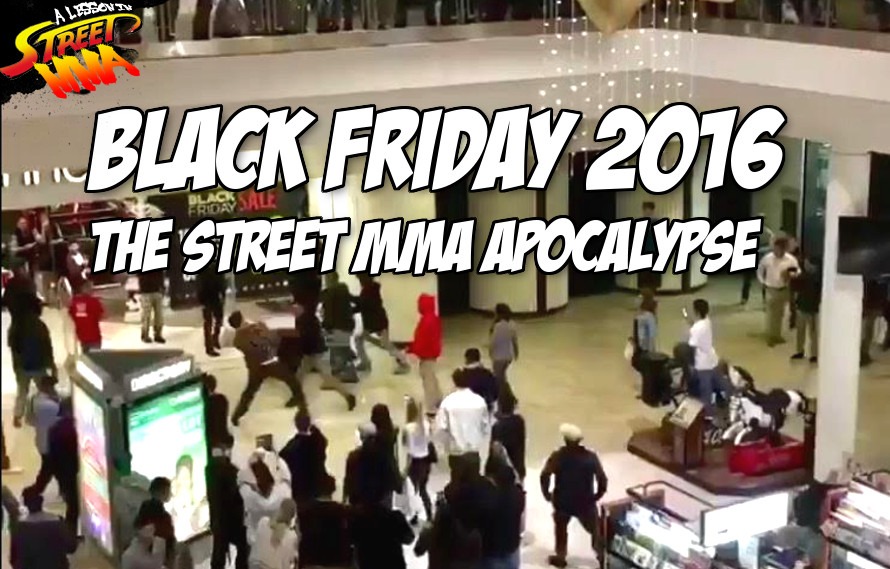 There is nothing more American than Black Friday Fights. Nothing says the 2016 Holiday season is upon us like strangers punching each other in the face in the name of a good electronics deal. Black Friday fights started slow in 2016 but as the unwashed masses wake up so does their thirst for violence and savings.

Throw 12-6 elbows for that shower clock radio. Stockton Slap the shit out of someone in hopes of getting that last lightly used DVD player. Soccer kick your downed opponent if he tries to grab that bread maker from your cold exhausted turkey glazed hands. This is Black Friday Street MMA and all rules of human decency are tossed to the curb for at least one day out of the calendar year.

Presented with little comment, here are the best cases of Street MMA that have happened so far on Black Friday 2016 AKA The Street MMA End of Days

At this point, #BlackFriday is basically just another excuse for thugs to stage mini-riots. pic.twitter.com/47zSlwk85o

2) Soccer kicks are legal in front of Macy’s

6) Stockton Slap folks until you get the savings you deserve

More updates to come as the consumer violence rolls in

Update 3: Oh my (fight) God. Tag-team Street MMA fight spills into the check-out line AND the Subway located inside your neighborhood Walmart

Update: War Machine is still in prison but he’s found Jesus and is writing. Here are his latest letters
← Read Last Post

Pic: Nate Diaz Says He's Down to Fight in Rizin and Now That's All We Want
Read Next Post →
Click here to cancel reply.