Pics: So Paige VanZant vs. Rachael Ostovich is a fight that is happening

by Team ME
in Featured, MMA

This is the part where we pretend you clicked on this post to read words and not pics. On paper, Paige VanZant vs. Rachael Ostovich may be the most attractive UFC fight since Luke Rockhold vs. Lyoto Machida.

Sadly Yoshihiro Akiyama AKA Sexyama is retired from MMA and never got the chance to face Rockhold in a fight. So Paige VanZant vs. Rachael Ostovich will have to do. For fans of extremely attractive people punching each other in the face, Paige vs. Rachael is the fight for you.

Set for the UFC’s first card on ESPN + on Jan. 19, 2019, Paige vs. Rachael is a fight with actual stakes to it. If you consider both fighters desperately needing a win high stakes than this fight is also for you.

Too bad the UFC is not a 1980s mid-South pro wrestling promotion because Paige vs. Rachael should also be a loser leaves town match. Paige has lost her last two fights and three out of four overall while Rachael has lost three of five and is 4-4 overall in her MMA career.

Yeah, but they are really good looking. So goes women’s MMA now, then and probably forever. If the UFC was feeling extra frisky they’d also make Paige vs. Rachael a loser shaves their head match.

They would both still be extremely good looking without hair but it would get UFC fans way more invested in this three round flyweight fight.

For those still reading this breakdown, you did it. For those who scrolled down right to the pics? Have at it you pervs (kidding….kind of).

such a fascinating stylistic matchup between these to ladies. pic.twitter.com/BqhjeSKJDJ

H/T to the powerful @jedigoodman for the header pic

Chad Mendes vs. Alexander Volkanovski Booked For UFC 232 On Dec. 29 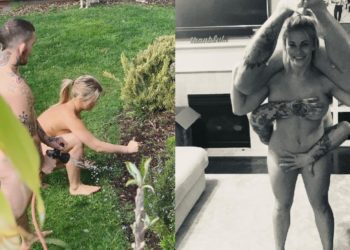