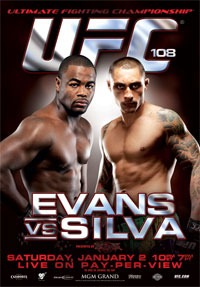 Whatever you planned on watching at 6:30pm tonight has been abruptly counterprogrammed by ZUFFA. For me, it was undoubtedly America’s Next Top Model. It’s the only show in which I have to tell my friends ‘Dude, it was the only thing on TV’ in order to mask the inner chick in me that wants to jump up and down and scream ‘I want to know what happened to Jayla!’. In the underground America’s Next Top Model community, we just call it ANTM since we have more important things to do like…eating a tub of ice-cream on our sofa.

Spike TV will air the first UFC event of 2010, UFC 108, just before their Monday night episode of TNA wrestling. The replay will be condensed down to two and a half hours and will feature perhaps the most cursed card in MMA history. If you decide to watch it tonight, be sure to have an exorcist readily available in your living room. Don’t be surprised if your television starts to spin around and spew projective green vomit in your direction. It’s just part of the UFC 108 process. Also, don’t be surprised if you spontaneously break your ankle while changing the channel to Spike TV tonight at 6:30pm. [Source]