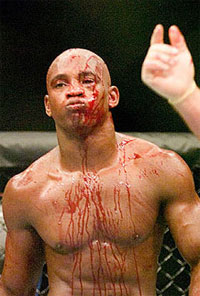 Bobby Green’s ‘Fighting Style: Hood’ can only aspire to be Yves Edwards’ ‘Thug-Jitsu’. It’s the coolest martial arts that no one fully understands but has already earned every ounce of street cred imaginable based on name alone. From the duration of 2002-2005, everything that was said about Eddie Alvarez, Gilbert Melendez and Frankie Edgar was being said about Yves Edwards. From June 2002 to May 2005, Yves Edwards went on an 11-1 run (with six of those wins coming inside the octagon). In a perfect world, Yves Edwards would have been crowned the undisputed UFC lightweight champion — unfortunately the lightweight title didn’t exist back in those days. Ben Fowlkes of MMAFighting caught up with the Thug-Jitsu Master to see if the nostalgia is chomping away at Yves.

It’s better to be the uncrowned champion than the guy who is currently being arrested on the street in front of my window. Whoever that guy is, he’s all thug, no jitsu. His proportions are incorrect. [Source]