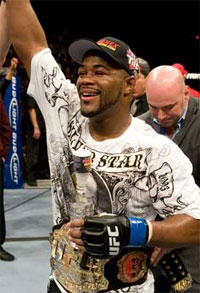 I’m open to the idea of being flown around the world in a private jet with 25 year old Macallan practically on tap to cover MMA, if the opportunity happens. Who wouldn’t be? Wine snobs for one. Just because I’m sitting here drinking a tasty red doesn’t mean I don’t hate wine snobs. They never want to try anything new and laugh at the idea of something like a craft ale having as complex a palette as wine. It isn’t like alcoholic beverages are hierarchical and wine is sitting right at the top, just like in MMA where being a heavyweight fighter means you are automatically a better fighter than someone who is middleweight. That idea is absurd. There seems to be an acohol theme running through here which was completely accidental. What I really wanted to say was that Rashad Evans has stated that he would be open to fights at 185lbs, a story which seems to have gone under the radar a little bit. As Rashad said at the UFC 145 post-fight press conference:

When you consider his only two losses are to two former champions, one of which being the most dominant champion since Chuck Liddell then you can forgive him for being open to further challenges. This of course sets up a rematch with Michael Bisping, who he beat at light heavyweight way back at UFC 78 in 2007 if Dana decides to match Rashad up at middleweight.

Junior Dos Santos is a much better wakeboarder than you
Read Next Post →
Click here to cancel reply.