You have always been more of a Fox Mulder than a Dana Scully. More of a Tenth Planet man than a Gracie Barra traditionalist. So while your friends laughed when Georges St. Pierre started talking about midnight visitors and UFOs, you kept quiet. Because the truth, more often than not, is out there, and you just want to believe. Good news. Thanks to Chael Sonnen, you can do that now. You can believe.

In October, Chael asked Georges whether, in his opinion, aliens had ever visited the United States. GSP answered:

“I never said . . . I never talk about aliens. I talk about non-identified flying objects. And if you don’t believe me, one day I was in Albuquerque . . . with Rashad Evans and Mike van Arsdale, a fighter called Alejandro, he’s a Mexican guy, and also Ali (Abdel-Aziz), I believe he managed Frankie Edgar. And we’re all in the car. And you could ask any of those guys . . . we were in a car in Albuquerque, New Mexico on the highway, and we saw a UFO all together. I don’t know what it was. But it’s something that we cannot explain . . . it came swift towards us and right away it changed directions and it disappeared.”

Cool UFO story bro, your enlightened friends snickered. But they can stop laughing now. Because Sonnen just asked Rashad about it, and guess what? It happened.

“You guys are in New Mexico, you’re in a car. I assume practice had ended and you’re going home, and you guys see a UFO. Take it from there,” Sonnen began.

“We’re driving down the highway,” Evans explained. “And the mountains are on the west of us. The sun was setting and it was getting pretty dark. We’re driving. Mike van Arsdale, Ali Abdel-Aziz . . . and this Mexican guy who couldn’t speak any English, his name was Alejandro, and he came down to train with us for a while.”

“And we’re driving,” he continued, “and we’re in mid-discussion busting each others’ chops, and we look over and we’re like, ‘Yo, what is that?’ and it just lit up the whole sky. And everybody in traffic starts to look at it, and everybody’s driving slow like you would if it started . . . all of a sudden a huge downpour. And everybody kind of slowed down, and everybody was kind of looking. And we’re like, ‘Yo, do you see it?’ And we just like . . . we’re driving really slow and looking on the highway . . . the traffic was doing this too.”

“And then it just took off, like a bolt of light. Wishhh.”

The encounter was understandably upsetting to GSP, a man who was notoriously afraid of spaceships. And just as his anxiety was reaching a nervous crescendo, Greg Jackson made things worse. “The room that he was staying in at Greg Jackson’s, it had a skylight in the room . . . you could see outside on his roof. And Georges the whole night was scared that the [UFO] was gonna beam him up through that because he’d seen them,” Rashad remembered.

So the UFO was real. GSP, Rashad Evans and probably a few dozen commuters saw it spark to life and snap off into the cold mountain air. Then a heartless Greg Jackson housed the former champ under a skylight, practically begging a space traveler to suck him right into their mobile alien research facility.

“Go get some intergalactic fans, Georges,” Jackson probably said. That’s what I like to believe anyway. 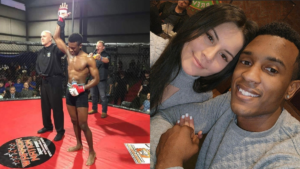