Yana Kunitskaya reveals that she and fellow UFC fighter Thiago Santos are expecting, with has made some fans concerned about how recently she fought

UFC fighter Yana Kunitskaya recently revealed that she was expecting a baby, with fellow fighter Thiago Santos. Well this is great news, it has raised some concern about how fit she was to compete, when she fought at UFC 264 last month.

In a sport which actually contains a surprising amount of sweet love stories, the relationship between Kunitskaya and Santos is one of better ones. It is always sweet to see them support one another through wins and losses, and being by each other’s side, and in each other’s corner.

That is why the MMA community was genuinely happy  to hear that Yana and Thiago were expecting a child. Yana posted to her Twitter, sharing a photo of her already decent size baby bump, revealing the news that she was pregnant.

“Did I eat to much watermelon?😅 Good job @TMarretaMMA . I will be back in octagon 2022” Kunitskaya wrote.

Did I eat to much watermelon?😅 Good job @TMarretaMMA . I will be back in octagon 2022 pic.twitter.com/iPygToHwMO

Did Yana Kunitskaya Fight While Pregnant?

The initial reaction of this news was Glee, which made sense considering how beloved this MMA couple is. However that quickly devolved into speculation, as people began to point out that Yana Kunitskaya seemed rather far along for someone who just fought a little over a month ago.

Prior to her TKO loss to Irene Aldana, Yana should have gone through a pre-fight medical screening, which is supposed to include a pregnancy test, which has made fans question if the UFC or the athletic commission allowed her to fight while pregnant. Aside from the obvious ethical red flags that this raises, it is important to not speculate about this without all the facts, as different women begin showing at different rates, and it takes some time before certain tests show a woman to be pregnant.

So Yana Kunitskaya was in a fight taking shots to the body last month and with the timeline she had to be fighting pregnant right ? pic.twitter.com/wYxmJZq0LB

If it turns out that Yana Kunitskaya was allowed to fight while pregnant, that would be a massive black eye on the already shady track record for UFC pre-fight medical screenings. With that in mind, the most important thing is obviously her health, and the health of their baby. 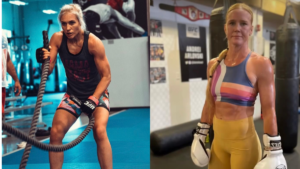 Exclusive: Yana Kunitskaya On Fighting Former Training Partner Holly Holm: ‘She Was A Big Motivation For Me’