Woman with no arms or kneecaps prepares for her black belt 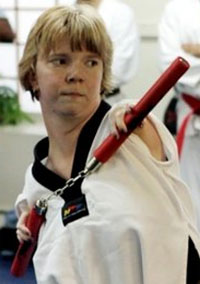 Two amputee stories in one day. We’ve definitely outdid ourselves. A chick with no kneecaps or arms is about get her taekwondo black belt and you’re still sleeping on your parent’s sofa. Today, you’ve officially ran out of excuses to throw on a gi and start training. It’s over with. People without limbs are competing in MMA tournaments and you’re just building a collection of cottage cheese around your thighs. What a waste of a couple of limbs. Sheila Radziewicz is kicking your ass in every possible way…and she doesn’t even have kneecaps.

A Massachusetts woman who was born without arms or kneecaps is preparing to test for her black belt in taekwondo. Sheila Radziewicz was scheduled to take her test next month at Bruce McCorry’s Martial Arts in Peabody. The 32-year-old brown belt, who was born with thrombocytopenia-absent radius, or TAR syndrome, told The Salem News she’s been training in martial arts for three years.

McCorry, her teacher, said he’s never seen a student like Radziewicz. Despite her condition, she can use nunchucks and break boards with her kicks.

Swinging around nunchucks without arms, that is beyond incredible. Now it feels like I’m obligated to put these limbs to better use aside from using my legs to spin around in this Wal-Mart swively chair. [Source]