The trendiest thing in Japan is to inject saline in your forehead while depressing the point-of-injection with a finger. It temporarily creates a doughnut-like deformation on one’s forehead and apparently makes you the hottest thing among people that like to take pictures of strange things and post them on the internet. I have no explanation for this trend other than just typing ‘Japan’ and referring to the fact that they created Mechagodzilla. Those guys can get away with anything. Who else could sell a concept of two Italian plumbers using giant green tubes to warp through the fabric of time and space only to use raccoon feathers to save the life of a princess from a giant, fire breathing turtle? You can take all the salvia in the known universe and still not develop a story as cooky as that.

While Brett Rogers breaking his arm in the first two minutes of his Bellator heavyweight tournament bout against Alexander Volkov isn’t as nutty as a doughnut-like deformation, it’s still rather disgusting. Rachel Mondeau caught up with Rogers after his unsuccessful bout last weekend and he told us what it’s like to fight with a broken, floppy arm for over two rounds.

I was really unsure of what happened to my arm. I didn’t really know until about the third round that it was broken. I’ve never broke anything on my body before, so I just kept I kept going. I thought I needed to keep fighting. By the time I found out that it was, I just felt that I needed to keep going and hopefully catch him with something—catch him with that left.

I’ve never broken anything. It was a surreal moment for me. I was like fuck — something ain’t right. I need to keep going with this and hope for the best. Volkov definitely realized by the third round that something wasn’t right, so he was trying to test me out from top to bottom. By the time we found it, it was just a little too late.

I did my part as far as surviving and making to it to the decision. That still is not a fight that I ever want to fight. I never want to have that type of fight again. Ever.

If you think that’s bad, check out the x-ray photo Brett Rogers sent us shortly after our interview. Now you have it, reason #5932 why you will never be an MMA fighter. 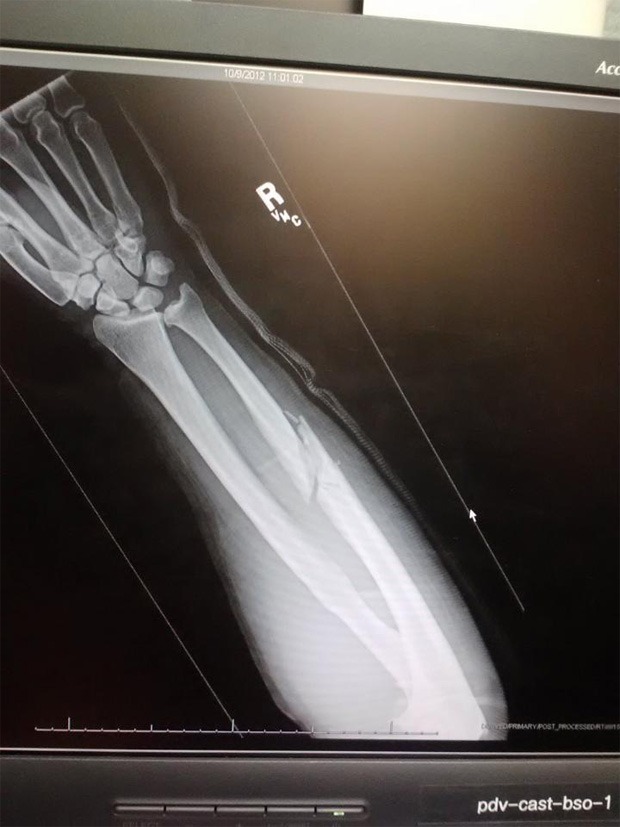 In a bizarre twist of events, Mayhem Miller claims Ariel Helwani made him look like an idiot
← Read Last Post

Check out our wrap-up video of ONE FC: Rise of Kings, right now! NOW!
Read Next Post →
Click here to cancel reply.