With a fire in his eye, Cole Miller talks his win over Bart Palaszewski 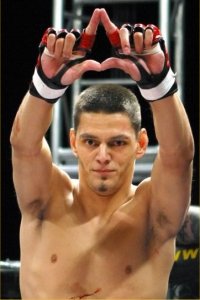 We like Cole Miller because he looks like he would be perfectly at home blasting bugs as a space marine in the Starship Troopers universe. Yeah, that may be a weird reason to be a fan, but it could also be attributed to Cole’s intense personality and genuine yearning to be the best martial artist he can be. Last night could’ve been Miller’s last fight in the UFC if he lost to Bart Palaszewski, but he was able to overcome Bart’s tough, midwestern shots and choke out the vet at the end of the first round.

After the fight, Layzie elbowed his way into the smelly media scrum and got a lens-full of Cole Miller talking about his impressive win, what it’s like finishing a tough guy like Bart, and his hope for a much busier future (dude has to have surgery a lot).

It's best to ask Ronda Rousey concise questions about Fallon Fox in the media scrum, or this will happen to you
← Read Last Post