Eye and Maia had one of the most entertaining matches on the entire card. This says a lot, considering the amount of star power that led the charge for the night, including Dustin Poirier versus Conor McGregor.

Eye’s face was utterly busted wide open in the fight. As blood flowed from her face, the cutman did his best job preserving Jessica and letting her continue fighting. Unfortunately, Eye lost the battle by unanimous decision, although she believes that she was robbed of a victory.

“We feel we got robbed,” Eye said.

“We’re going to go back and check out the tape but we appreciate everyone’s support. And holy sh*t that was gnarly!”

Jessica Eye’s response to his loss at #UFC264, via her Instagram. pic.twitter.com/8K7Lc9AE6O

Fans of the sport posted their initial reactions to the photo of Eye that floated around the internet. Many fans believed that the cut was so deep that Eye’s skull was revealed in the image. Since then, Dana White has shared a photo of Eye being stitched up, reporting that she received 13 stitches due to the deep cut.

“That was a beauty,” White said about the cut during UFC 264 presser. “She’s (Jessica Eye) tough as nails. There’s a logical thing that happens to you when you get split wide open like that and blood’s running all over your face into your eyes. She’s tough man, she’s a gamer.” 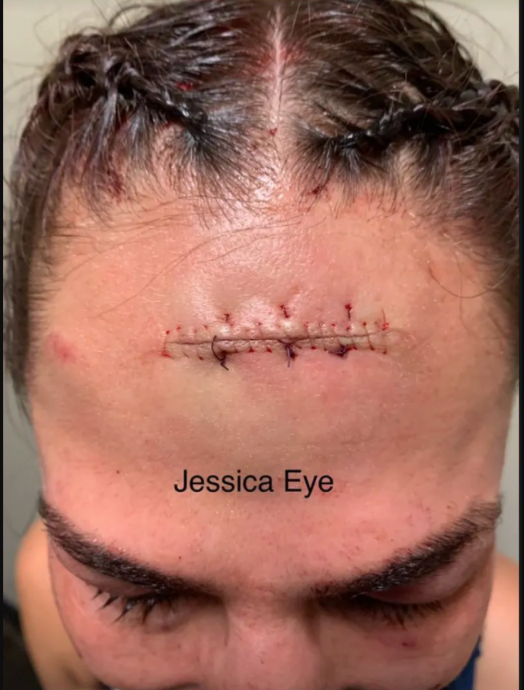 Jessica Eye's cut after the fight with Jennifer Maia pic.twitter.com/0rYNjeYyAW

Besides the injury, the loss put Eye in a lousy spot within the UFC women’s flyweight division. Jessica has lost three fights in a row and four out of her last five. Fortunately, it seems like Dana enjoys her performances. So, she may not get cut from the organization as many other fighters on a three-fight losing streak do.