When Rampage Jackson comes out to the Pride FC theme, expect greatness 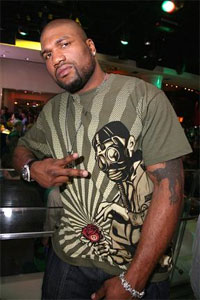 Come on people. Seriously, just come on. If you believed Rampage would lose tonight, then you obviously thought too much with your brain and not enough with your heart. We just witnessed Rampage [expletive] Jackson. There’s a reason why he’s called Rampage and it’s not because he has a strong affinity to arrange flower bouquets.

Up until this point, your entire perception of Jackson has been from half-hour/hour edited segments of Quinton from The Ultimate Fighter Season 10 and his unanimous decision loss to Rashad Evans. There’s another side to Jackson. The side that slammed Ricardo Arona out cold in Pride. The side that managed to collect a total of four MMA belts in his lifetime. We all saw Rampage Jackson tonight and it was something that we should never forget.

With Rampage’s win over Machida and his Hollywood blockbuster film ‘The A-Team’ being released on DVD just in time for Christmas, somewhere in Las Vegas Dana White is leaning back in his really, really expensive Italian leather chair snorkeling through his ocean of money (yeah, he keeps it entirely in his office…Scrooge McDuck style).