Weekly Polls are out, ‘Baller or Buster’ is in

In an effort to constantly reinvent ourselves like Madonna in the mid-90s, we have decided to say aufiderzein to our Weekly Polls and have replaced them with our new idea, ‘Baller or Buster’. Every Tuesday, we will give you five topics in the MMA world to give a grade of either ‘Baller’ or ‘Buster’. For those of you who’ve never had a conversation with Bishop Magic Don Juan at Roscoe’s Chicken and Waffles at 4am in the morning, if something is deemed ‘Baller’, it essentially means that something has reached the pinnacle of flamboyant confidence and superior showmanship. Alternatively, something becomes ‘Busterish’ if it’s a clichéd, pathetic attempt to be cool or just drowned in general lameness. For example, my old roommate who we all relied to be a sloppy mess on any given day in the week has suddenly stopped drinking because his girlfriend threatened to leave him. That’s busterish. On the other hand, if my old roommate decided to make Star Wars episodes on his webcam out of individual packets of condiments, spare lego blocks and empty beer cans while belligerently drunk and published them on Youtube, that is baller.

Enjoy the new stuff and be sure to pour a little bit of whatever liquid you are currently drinking in honor of our Weekly Polls that have been with MiddleEasy since the beginning. 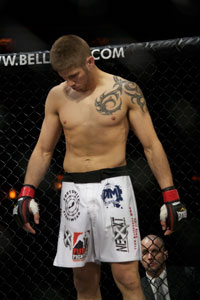 Ryan Thomas snooped on McClintock's Myspace page for a way to defeat him
Read Next Post →
Click here to cancel reply.