WEC 52 may be fifteen days away, but let’s start getting hyped about it today 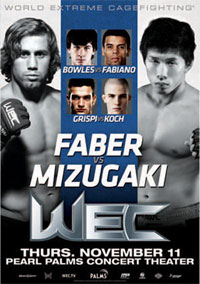 The last time I hung out with Urijah Faber, we were playing a beta version of EA Sports MMA at the E3 show in Los Angeles last summer. It was surreal. Faber was too preoccupied with someone taking the iPhone be plugged into the wall socket to notice the smack-down I granted him in the game. It would be the first and only time I would defeat Urijah Faber at anything mixed martial arts related. In just fifteen days, Takeya Mizugaki will attempt to defeat Urijah Faber by temporarily disrupting his consciousness at WEC 52 at The Palms and hopefully earn another shot at the WEC bantamweight title.

It may be over two weeks away, but I woke up this morning with the intent of writing something about, what I believe, will be the greatest WEC card of 2010. That’s a gargantuan claim, with what we’ve already witnessed at WEC 51: Aldo vs. Gamburyan, WEC 49: Varner vs. Shalorus and of course WEC 48 (or the card mysteriously known only as Aldo vs. Faber). However, I simply can’t imagine that if you put together Damacio Page, Javier Vazquez, Demetrious Johnson, Josh Grispi and Chad Mendes on one card, it wouldn’t lead to anything but some incredible conjunction of ‘awesome’ that will manifest on your television on November 11th.

You may have missed your fair share of WEC cards this year, but for some reason I have a premonition that this card will lead to either submission or knockout of the year (or both). I couldn’t live with myself without putting this article out. It needs to exist, and now that it does, I can finally spend the rest of the evening trying to extract the piece of beef jerky I accidentally wedged in my teeth the night before.