Everyone out there, pat yourself on the back. With the endless comments across the internet and the innumerable message board threads that appeared just after UFC 143’s Carlos Condit vs. Nick Diaz bout have finally paid off. Your influential voice has been heard by the top brass at ZUFFA, and now it looks like Carlos Condit has accepted a rematch against Nick Diaz at some point in 2012. No need to smash anymore flat-screen televisions in disgust — Nick Diaz vs. Carlos Condit II is on the horizon.

Here’s what Dana White said on Twitter just minutes ago when an eager fan asked about a potential rematch. 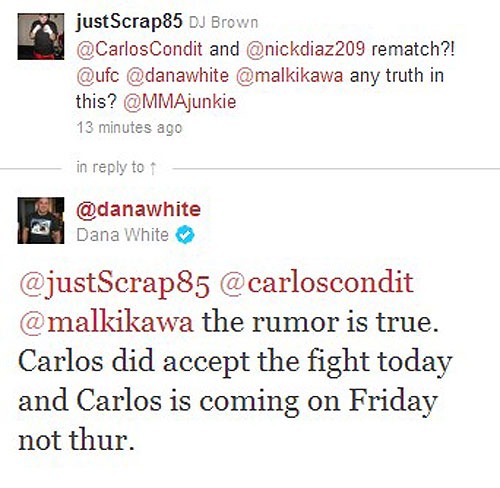 What Dana White is referring to at the end of his Tweet is essentially Carlos Condit is coming to Las Vegas to take part in an ‘announcement.’ There you have it folks, now get the popcorn ready — and don’t be scared to put butter all over it, homie. Props to LiverKick.com writer, Rian Scalia, for the find.