If you were named ‘Bigfoot’ and you enrolled in a nickname contest and somehow you lost, it was rigged. Being nicknamed after a mythical creature who is forever blurry when captured on camera is the highest honor anyone can bestow on an MMA fighter. Let’s not assume that because Bigfoot Silva caught an L to Daniel Cormier that it removes him from being discussed in the top ten heavyweights in MMA. For all we know, Daniel Cormier could be the number two ranked heavyweight in the world and his training partner Cain Velasquez, the number one ranked heavyweight on the planet. Of course, Bigfoot Silva wants to change all of this at UFC 160 in his second bout against Cain Velasquez.

It’s well known that Junior dos Santos and Bigfoot Silva have been buddies for a while now. However, we simply do not know what’s going on in this picture Brazil’s Combate captured.

Let’s make this fun. Caption this picture and the comment with the most upvotes by the end of the day will get a brand new copy of Bruce Buffer’s ‘It’s Time’ book. 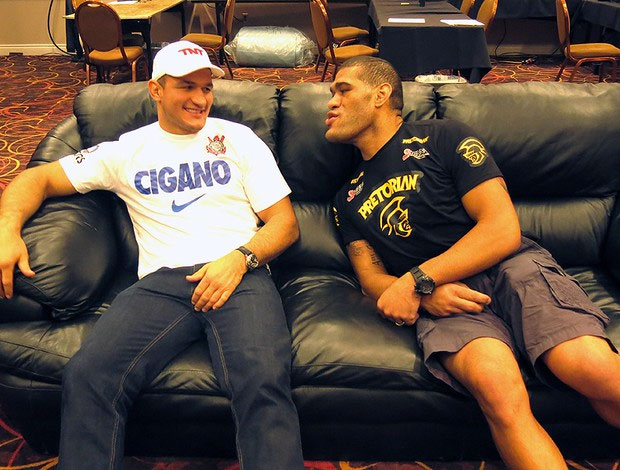