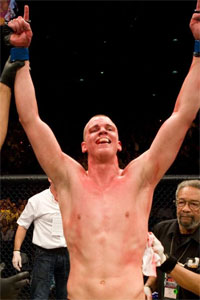 Parakeets, European hip-hop music, stuffed frogs and Stefan Struve in a prefight mini-series documentary called ‘The Castle’ is the most random combination of things you will see all morning. If you woke up thinking you really want to see something that will make you use the word ‘hodge-podge’ today-then you should watch this video. It’s a nice little look into Struve’s life outside the Octagon while he prepares for his upcoming fight against Travis Browne at UFC 130.

He trains twice a day, still lives with his parents and his Mom still makes him dinner every night. He checks his facebook from a computer only inches away from where his Mom is unloading the groceries and he even sits on a couch covered in stuffed animal frogs. He talks about buying his own place and moving out on his own place though. I’m assuming it’s so he can have more privacy when using facebook and look at skanky chick pictures without his Mom sitting right next to him. It has to be hard to get your facehooking on with Mom and a bunch of beady-eyed stuffed frogs looking over your shoulder all day. Check it out and if you enjoy it, looks like there are three more episodes to come.

We finally have the official promo for Dream: Fight for Japan
Read Next Post →
Click here to cancel reply.