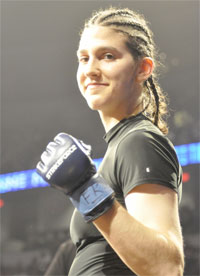 Roxanne Modafferi is the definition of amazing and you’re an idiot for disagreeing with that statement. We just replaced your reality and substituted ours, sort of like those recruiters that wear neatly pressed business suits inside the Scientology headquarters in Los Angeles. Unlike Scientology, we won’t sell you on some story of an evil alien wrangling other aliens and throwing them in a volcano in Hawaii. We can do much better than that. Instead, we’ll tell you about a universe where Roxanne Modafferi and Tara LaRosa are civil enough to sit next to each other on the eve of their battle at Moosin: God of Martial Arts which goes down tonight on PPV. Sure Pudzianowski vs. Sylvia is an intriguing fight, but every hardcore MMA fan will be tuning in for the rematch that has been brewing for over four years.

Back in 2006, Roxanne became one of only five fighters to ever go to decision with LaRosa in her 19-1 record. In fact, the last time Tara LaRosa was handed an L was to Jeremy Horn’s girlfriend, Jennifer Howe, nearly 10 years ago. Here’s where it gets interesting. Jennifer Howe has a near perfect record of 15-2 with both of those losses coming from the hands of Roxanne Modafferi. Bauzen will be at Moosin taking pictures and serving people on the history of Muay-Thai if solicited. If you see him, be sure to give him a hug.

Check out this video of our bud Roxy sitting next to her opponent while showing off her weird little Japanese fan that you can snatch up from her website. 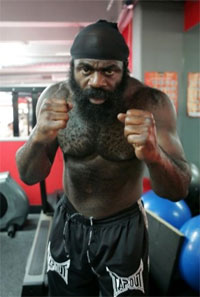 Kimbo Slice will NOT be participating in Bellator's heavyweight tournament
Read Next Post →
Click here to cancel reply.