Watch Raquel Pennington Tell Her Corner That She Is Done at UFC 224, and Have Her Corner Send Her Out to the Fifth Round Anyway 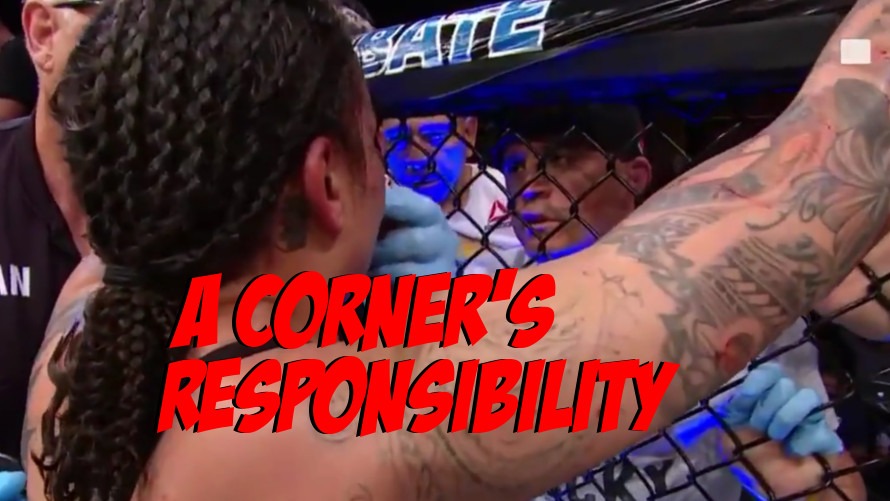 Amanda Nunes beat the brakes off Raquel Pennington. It was a four and a half round drubbing. At no point in the fight was Nunes in any danger, and at no time was the result ever in doubt.

And it seems like after four rounds, Pennington knew it. And she wanted out. Her cornermen had a different idea.

There is something toxic in the culture of MMA camps. A combination of the corner’s confidence in their fighter’s ability (sometimes despite massive evidence to the contrary), and their belief that anything can happen in a fight, and a financial reward system that relies so heavily on victory, all blend together to create a horrific moment like this. To watch a corner instruct their fighter that they are in fact not done, but instead just need to “adjust their mindset” after so clearly being broken was disgusting.

One of the most egregious parts of the interaction is the complete lack of an actual plan to make substantive changes in the fight. Where in any of the Pennington corner’s advice was there any instruction on how to gain the upper hand over Nunes? Where is the technical advice? Where is the strategy? Vague platitudes like “change your mind set” don’t mean shit compared to the concrete reality of being continually hammered in the face.

There's people going like "tough call for the corner, title fight blablabla"? She got beat up for 20 minutes, her leg was fucked and SHE SAID SHE WAS FUCKING DONE. What the fuck did you expect to happen in the 5th?

The argument that the fighter’s corner knows their fighter best, and that perhaps the fighter needed that push or they would regret quitting later on is not that compelling to me. It might be that the corner does know their fighter, and knows that sometimes they need to be convinced to stay in a fight, but ultimately that consent to continue has to come from the fighter and it has to be genuine.

What separates the violence of competitive fighting and assault on the streets is the willful engagement of both parties. Why can I sit back and watch Cyborg beat the brakes off some over-matched Bantamweight? Because I do it secure in the knowledge that her opponent agreed to be there (and also because I’m a blood thirsty maniac). And sure, I understand pressures from the promoter, their camp, and their economic situation can almost force a fight to agree, but the fighter’s willingness to stay present in a fight is imperative to maintain some type of decency in the midst of all this brutality. It’s the one thing we must maintain as a sport. Otherwise why not drag prisoners of war to the cage to have Derrick Lewis ground and pound them for our pleasure?

Going into the fifth round, Pennington was done. She knew it, the crowd knew it, the commentators knew it, and so did her cornermen. Her leg had been injured, her nose had been broken, and her will to continue was gone. To send her out to fight again is an abdication of a corner’s most sacred responsibility. Despite all of Raquel Pennington’s toughness and pride, she admitted to herself and her closest circle the hard truth. She just couldn’t continue. And her corner took that trust, and spat in it’s face, all for some vague sense of bravado or warrior spirit. It was one of the sport’s most disgusting moments.

Video: Lyoto Machida Discovers Time Travel, Takes Us Back to UFC 126, and Knocks Out Vitor Belfort with a Front Kick
← Read Last Post

50 Cent in MMA, Nunes vs. Cyborg, Belfort and more in the Sunday Morning Rumor Mill
Read Next Post →
Click here to cancel reply.