I will not go to sleep tonight until someone out there makes a ‘Good Guy Nick’ meme. Here, I’ll even get you guys started with this rare picture of Nick Diaz actually smiling. Actually, since I want to sleep this evening, I’ve made a Good Guy Nick meme. 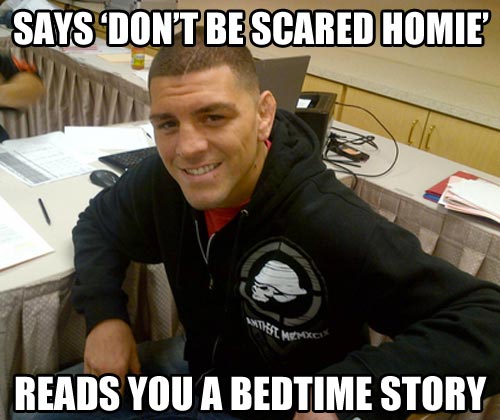 This past weekend in Seattle, LayzieTheSavage and Nick Diaz were strolling around town looking for homeless people that were devoid of rib cages and fortunately for them they found the guy in this video to hear a highly abbreviated version of his life story. Although Nick hasn’t really earned any fight revenue since his fight against Carlos Condit in February 2012, he dipped in his pockets to give this dude with no ribcage some loot — maybe to buy an artificial rib cage. Check out the video after the jump.