Joe Warren vs. Joe Soto was such an astonishing fight, Bellator made a highlight reel and placed it on YouTube in just a few hours. These guys understand what it means to be viral in a non-communicable disease sort of way. When Joe Warren pulled the upset over Kid Yamamoto at Dream 9 in only his second MMA bout (dude had no amateur bouts), I stayed up the rest of the morning trying to find a way not to compare it to Mike Tyson vs. James ‘Buster’ Douglass. It’s impossible. I still consider it MMA’s greatest upset and people will continue to throw tomatoes at me. We all knew who Kevin Randleman was when he KOd Cro Cop in Total Elimination. Matt Serra won TUF 4 before he defeated Georges St. Pierre. When Joe Warren stepped into the Yokohama Arena, no one knew who he was and he served a guy that technically never lost a fight, his first true loss.

Last night at Bellator 27, Joe Warren did it again. He’s like a never-ending basket of shocking comebacks and last-second finishes. It’s almost like he needs to get beat-up for an entire round just for him to activate. Check out the events that transpired on this nifty highlight video in case you missed it. [Source] 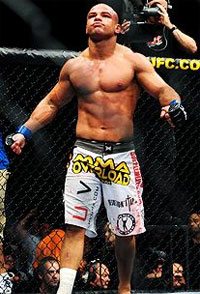