Watch Jay Hieron vs. Joe Riggs without a piano falling on your computer

Some of you missed the Hieron vs. Riggs fight last weekend at Strikeforce Miami. Some of you meaning every person that wasn’t inside the BankAtlantic Center on January 30th 2010. A couple months ago, Riggs vs. Hieron was on the main event and everyone could finally get a full-nights sleep with the knowledge that Jay Hieron is finally getting some respect from the universe. Wrong. Wes Sims and his pro-wrestling dialect decided to bump the Hieron vs. Riggs fight to an undercard and we all sat there on our sofas in a hopeless state of despair. A few days later, EA Sports MMA announced they would stream the fight live on their site free of charge. Their intentions were good, but the technology was straight out of Bedrock. Not the diatomaceous rock or the Lil’ Wayne song. We’re talking about the city where you had to power your car via your blister ridden feet. Life in Bedrock must have been rough, but still not as rough as not being able to see Hieron vs. Riggs. Showtime has finally released the fight and it will be available until this Sunday. After which, it goes back into some vault that only a selected few on this Earth know about. Until that day, watch Jay Hieron vs. Joe Riggs right here on MiddleEasy.com

Are you tough enough to carry the Ultimate Visa Card in your wallet?
← Read Last Post 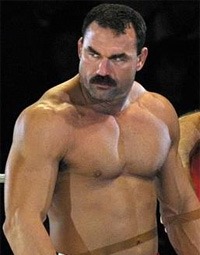