Colby Covington went down to Sao Paulo, Brazil and made himself a contender for the Welterweight belt. After putting a heavy beating on Demian Maia, Covington did not leave any doubt to how he felt about his host country in a post-fight interview for the ages.

No translator needed. Colby Covington, let us know how you really feel about Tyron Woodley and Brazil. Good grief! https://t.co/MtLOLyBwGv

Good Lord, good man. You’re about to start a riot. It didn’t help that the crowd was already in a frenzy after Colby Covington did this to their national hero. 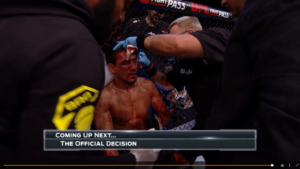 Naturally, Covington had to be rushed away from the cage. The Sao Paulo crowd said goodbye by hailing down trash on the fighter as he left the arena. It was a scene out of Southern regional wrestling in the ’80s, and it was amazing.

Hate Colby Covington all you want, but he is playing an expert heel.

Oh, Colby Covington … you had to have known this is what the reaction would be at #UFC-Sao Paulo. https://t.co/PI6Ggf0tuG pic.twitter.com/iOUh8GEx6o