Shortly before I wrote this article, I wondered if Brock Lesnar coming out at UFC 121 throwing a crazy amount of knees in the first twenty seconds had anything to do with Pat Barry training him weeks before his title defense. From what I remembered, a few of those landed which forced Cain Velasquez against the cage, Brock went for the takedown and then the fight started to dip into Cain’s territory. In retrospect, the main event at UFC 121 could have been a battle against the most potentially offensive torso tattoos in MMA history. Don’t worry, I’m right up there with him. The ink on my chest is a direct result of a failed bet in Pontypridd, Wales. Good luck finding that place on the map.

We caught up with Anthony Pettis in Milwaukee, Wisconsin at Showtime Sports Bar, a place appropriately named after him since he owns it, and he told us about the time when Pat Barry essentially called out every member of Pat Miletich’s camp a few years ago. 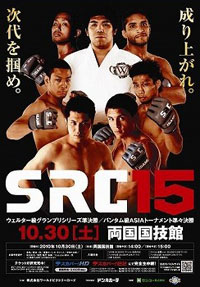 You do not want to miss Sengoku 15 tonight -- seriously, you don't
← Read Last Post
Nick Diaz will make you want to get a pair of nunchucks
Read Next Post →
Click here to cancel reply.