Wait, there’s more MMA comic book news for you to marinate on

If you’re not Generation Y, then you wouldn’t even begin to understand how Image literally ran the comic book game from its inception in 1992 to about 1996 when the company partially broke-up. In the early 90s, Todd McFarlane and a few other Marvel illustrators were fed up with the business practices of Marvel Comics and sought creative control over their work. Marvel disregarded their demands and eight illustrators chose to leave the company and form an exclusive partnership in order to manifest what we now know as Image Comics. The company was created in 1992 and the world saw a blitzkrieg of mind-bending illustrations and deeply complex storylines like those in The Maxx, Spawn, Youngblood, Wetworks and Shadowhawk. The advent of Image Comics did to the comic world what The Matrix did to action films. Within just a few months, Image Comics owned 10% of the comic book industry — surpassing DC Comics.

Things were going extraordinarily well in the comic book world. Personally, I think I owned every comic Image put out from 1992-1993 — I even have the giant container with individually wrapped comic books to prove it. Within a few years, things started to get somewhat strange. Partners within Image claimed that Rob Liefeld (one of the creators of Image comics, and the mind behind ‘X-Force’) begin to use revenue gained from Image to promote and financially back his independent comic company, Maximum Press. Specifically, Marc Silvestri (the former illustrator of Marvel’s ‘Wolverine’) claimed that Liefeld was recruiting artists from his studio, which forced Silvestri to leave Image Comics in 1996. All the partners within Image Comics put the pressure on Liefeld to resign from Image, and eventually later that year Liefeld left the company. After hearing the news, Silvestri literally returned with Image a few weeks later. It’s important to note that aside from Todd McFarlane’s ‘Spawn’, Rob Liefeld’s ‘X-Force’ franchise held the greatest influence on my childhood. When you start talking about time traveling doppelgangers that have the ability to trap people in the universe and throw cybernetic implants in there for good measure, you have me for the rest of my life. I would put the ‘X-Cutioner’s Song’ storyline as one of the greatest comic-book crossovers since ‘The Infinity Gauntlet’ which went down just a couple years prior.

Now would be a great time to tell you that I didn’t attend my Senior prom.

Starting this month, Image Comics new MMA-themed series, ‘Heart,’ goes on sale. G4’s Blair Butler is making her professional comic writing debut with the four-issue miniseries. Of course, everyone at MiddleEasy will read it. We’re the pioneers of what’s cool in the MMA industry — didn’t your mom tell you this already? Check out the cover of the first issue of ‘Heart.’ [Source] 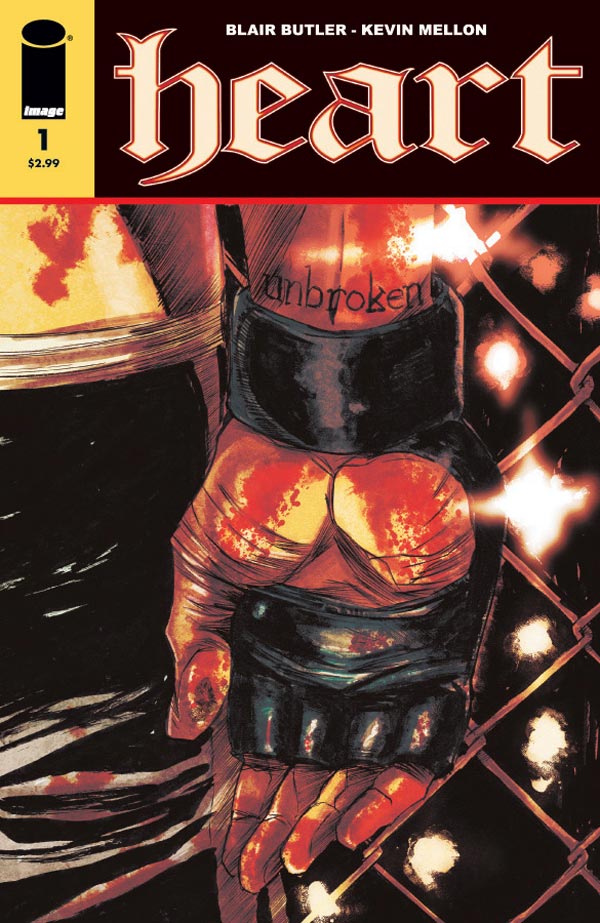